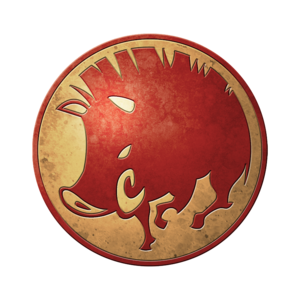 he dwarves, a proud and tenacious people, live in the heart of the Ægis mountain chain ever since the world was the world. The legends of the plains say that these lofty summits, which touch the domain of the gods, are alive. Rock comes to life with a secret shiver and the mountain rumbles and smokes to the rhythm of huge mechanisms of bronze that animate the underground cities of Tir-Nâ-Bor.

The dwarves have lived for a long time for their means, without counting on anyone, and without taking part in the dangerous games of treacherous alliances. Their homeland is their soul, and strangers are rarely welcome. Those who live on the plans have perpetuated their people's martial traditions, while those of the mountains practice the secrets of the forge and of steam They all await the Argg-Am-Orkk - the final age. An era of destruction predicted by the gods.

There is no longer any time for experiments and for helping each other, for the long wait over with the coming of the Rag'narok. It is time for war. The dwarves raise their weapons and await death with their feet firmly planted on the ground. He who lives last, lives best!

As far back as their writs can remember, the dwarves have always existed, just like the animals and the mountains. like many others, the history of the nation of Tir-Nâ-Bor begins during the Winter of Battles.

At the time the climate was so harsh that herbivores began hunting other animals to feed themselves. Civilizations did the same, and the people that were harassed the most was the only one to have stocked up massive reserves - the dwarves. That is when the gods came to them to offer a deal. Their children, the giants, were dying and their heavenly parents were no longer there to come to their aid. So the invited the dwarves to their domain of the Ægis, this protecting them from winter and the desires of the other peoples in exchange for food that would allow the giants to survive. The deal was made and the dwarves settle in the caves of the Ægis Mountains. Tir-Nâ-Bor was born.

When the Winter of Battles was over the dwarves appeared from their sanctuary: some returned to the plains and got on with their lives while others decided to remain in the mountains. So the dwarves lived the ages, renewing the vow that bound them to the gods of the Ægis. Tir-Nâ-Bor developed, sheltered from need: the mountain dwarves discovered the secrets of metal and the power of steam. As for their brethren of the plains, they became formidable warriors. In time, the dwarves' isolationist traditions became less rigid and they finally decided to go and explore Aarklash. That is how Tir-Nâ-Bor came to sealing its first alliance with the Empire of the Griffin.

Alas, an important event caught the dwarves with the backs to the wall: the appearance of the demons of Mid-Nor. The divinities of the Ægis, are powerless, for the god of chasms is their equal. Until now the dwarves always felt protected from outside threats, but this one comes from inside.

Has the hour of the Argg-Am-Ork - the end of days - finally arrived?

Scepter of Authority of Uren

The Strike of Steel

Wall of the Resolute

In My Father's Memory

Soul of the Titan