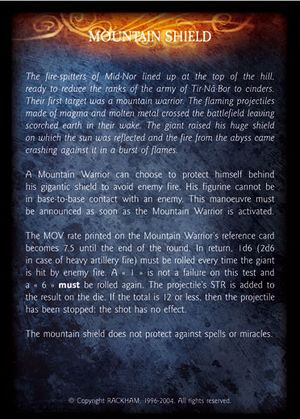 The fire-spitters of Mid-Nor lined up at the top of the hill, ready to reduce the ranks of the army of Tir-Nâ-Bor to cinders. Their first target was a mountain warrior. The flaming projectiles made of magma and molten metal crossed the battlefield leaving scorched earth in their wake. The giant raised his huge shield on which the sun was reflected and the fire from the abyss came crashing against it in a burst of flames.

A Mountain Warrior can choose to protect himself behind his gigantic shield to avoid enemy fire. His figurine cannot be in base-to-base contact with an enemy., This maneuver must be announced as soon as the Mountain Warrior is activated.

The MOV rate printed on the Mountain Warrior's reference card becomes 7.5 until the end of the round. In return, 1D6 (2D6 in case of Heavy Artillery fire) must be rolled every time the giant is hit by enemy fire. A "1" is not a failure on this test and a "6" must be rolled again. The projectile's STR is added to the result on the die. If the total is 12 or less, then the projective has been stopped: the shot has no effect.

The mountain shield does not protect against spells or miracles.