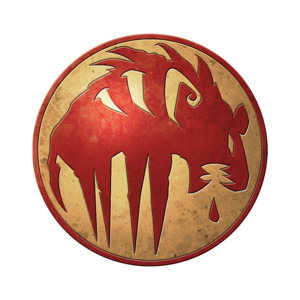 "One night Yllia came down from her celestial throne to visit the Realm of the mortals. While the moon was filled with wonder by nature's beauty, her gaze fell upon a pack of wolves. The purity and the strength of these noble animals captivated the goddess."

To the devourers all this is lies. Vile-Tis, a fallen god coming from the stars, has revealed the true story of their origins to them

"One night Yllia came down from her celestial throne to visit the Realm of mortals. While the moon was admiring her own reflection in a pond, a powerful Wold became spell-bound to her beauty and wished to make her his mate."

Vile-Tis, carried by a fallen star, crashed in the heart of the territory of Ellis, a pack leader. the Wolfen, sensing his incredible ferocity, naming him the Beast.

"How could a wolf rouse the love of a goddess? Then came a strange god who offered the Wolf a deal. The Wolf accepted it and the god used his powers to the Wolf into a man of divine beauty. The disguised animal introduced himself to Yllia and she gave in to his advances."

Vile-Tis revealed the god's games and the atrocities they made their own children suffer to the stupefied Wolfen.

The rebel god wanted to crush his celestial brethren with his own hands. The gods has united to vanquish Vile-Tis and cast him down onto Aarklash. This is how the insolent warrior god came to share the fate of mortals.

"The moon became aware of the lies when she gave birth to a litter of wolf cubs. Her wrath was terrible: she cursed the Wolf and his children. They would never find love, neither with nature nor humanity. Their savagery would be their curse. Thus were born the Wolfen."

In fact Yllia hated her children...

Dumbfounded and sceptical, the Wolfen asked the Beats only one question: which deceitful and lying god has offered to transform the enamoured Wolf into a man? Vile-Tis' answer came like a clap of thunder

The Beast was preparing to confront his divine brothers when Ellis proposed a deal. They both desired one thing: to see the gods die. Ellis and his pack would be Vile-Tis' warriors if he helped them get their revenge. A new pact was sealed.

Thus were born the Devourers.

The Shadow of the Beast

Voracity of the Beast

Curse of the Wild Beast

Pact of the Enchained

Rage of the Hyena

The Chains of Bitterness