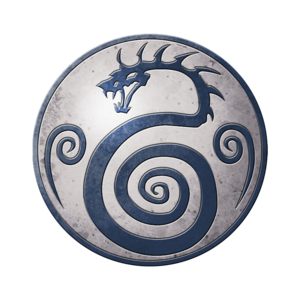 Before time was recorded, Desire created the six wyrms. The four elemental dragons and then the dragon-gods of Light – Maloth - and of Darkness – Vortiris. Both titanic wyrms were locked in an eternal battle with one another. Snuffing out light and darkness trading blow for blow, constellations became malleable from the power exhibited across the universe. Maloth’s ability to bear children was the focus of the contempt, for Vortiris could not bear offspring of his own. In a deal with the typhonism mage-lord of Algandie, Celebdel, the first serpents were created in the image of Vortiris. They were an evil amalgam of his malice, superiority, and his contempt and hatred of light - including his wyrm brother, Maloth. The vortiran race settled on the home continent of Vortiris, Belgorn, where they waited for what Chroniclers, like Kyllion the Elder, estimate many millennia, grew in power, and accumulated knowledge to fight against the gods. The Ophidian Alliance was born.

Their power had not gone unnoticed, unfortunately for them. The Utopia of the Sphinx, the remnants of the ancient peoples Ishim’Re, had caught wind of this new dark power growing across the sea crashing on the shores of their empire in Syharhalna. Ophidians and slaves lead by Vortiris to free Desire, the Sphinx fortress, that would later be called Cadwallon by Cynwall founders, was seized by Ophidians in 220 A.W. The Father of light, Maloth, attempting to keep Ophidians and Vortiris separated from Desire, along with his dragon children sealed themselves including Vortiris in the labyrinth called Garden of Desire. The bloodshed was immense and virtually endless. The largest and bloodiest battle between them lasted a week. The continent of Belgorn and Cadwallon had become devoid of life; covered by ash and gore of the Ophidians, their slaves and the Sphinx.

Then, in 255 A.W., through the elemental void, the call of Vortiris came ringing, a cacophony of anguish and pain. At the height of its power, the Ophidian Alliance emigrated into the elemental realms following the call of their lost God, abandoning all strongholds and civilizations nearly overnight, including the fortress that would become the Cynwallean city of Cadwallon. Small contingents of Ophidian trueborns – called vortirans - and slaves hidden in the depths of Aarklash and beneath Cadwallon were what remained of one of the greatest powers of the world. At this time, the original Ishim’Re and Sphinx exiled themselves to the Realms, recognizing that they would need to return when the Ophidians resurfaced.

The tale of the Brothers of Kashem from the Book of Arios tells of one of the many repositories of knowledge attempted to be seized by Ophidians long forgotten by their cohorts.

Today, the Ophidians have regained their power and strength in numbers in the shadows and in secret symbiosis with nations of Darkness. They have infiltrated the City of Thieves, the Free City of Cadwallon, by posing as ambassadors in an effort to get near the dreamlike maze and portals to the realms in order to pursue the myths of Vortiris disappearing from what is now called Cadwallon. By 1001, they have returned from the shadows and no longer hiding using their strength to reclaim what they left. Using Syhar ships in exchange for forbidden knowledge, in 1004, they have seized the archipelago of the Fangs of Fire enslaving all pirates and sailors who dare to venture there in search of hidden riches, purported by the Ophidian Alliance.

Underneath the city, in the Dressmakers district in Var-Nokkt, lies the ruins of their greatest culmination of knowledge, forbidden or otherwise, that has been amassed for centuries since the disappearance of the original lineage; vortirans. The Erratum of the Ophidian Alliance now lies in the hands of the Templars of Hod.

Wings of the Abyss