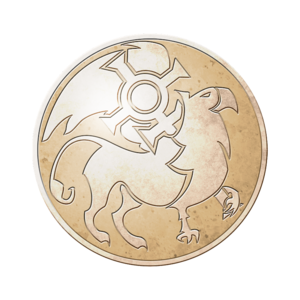 Arcavius had a vision of Merin, the one and fiery god. After having given up his title, his fiefdom and his weapons, he wandered across the continent and his new religion attracted an incredible number of followers. They founded an empire of hope and of Light: Akkylannie. Soon aftereward, Arcavius left again to journey all over Aarklash to preach the one god's word. He never returned.

Merin's disciples multiplied and form a people united by their faith. Alas, Arcavius' dream is dying. The coming of the Rag'narok has covered aarklash with a dark veil. The Griffins have gone on a crusade to faraway lands in the east to find their prophet's tomb and battle the enemies of the one truth. Inquisitors and Darkness Hunters track down traitors and heretics in a terrifying witch-hunt.

Stuff happened. I bet someone died once.

On the battlefield, the morale of the Griffin Empire’s soldiers is only equaled by the steel of their armor. Discipline and Resilience are the characteristic that defines the Griffin army. A Griffin army can expect to equal or more likely beat other armies with both statistics. Utilizing the strategic advantage Griffins excel at holding positions and getting to them with their discipline advantage. While the army does not feature high strength values and typically average offensive stats, it can make up for this weakness with powerful faithful and magicians. Combine that with the army's ranged attacks and the army can be quite a challenge to overcome.

This army has some units. General overview of units. Griffins have Fanaticism, yada yada.