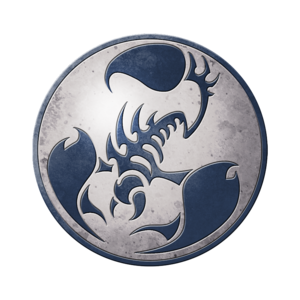 A mad project was hatched one day in the mind of Dirz, an Akkylannian scientist-monk: the creation of the perfect being according to the criteria by the one god. To do so he called on the impious knowledge of the Order of the Black Togas of Acheron. His ambition brought him to his downfall and then to exile. Accompanied by about a hundred followers, he was forced to flee the Akkylannian lands when the Inquisition declared him a genetic.

It's in the heart of the desert of Syharhalna that he found the salvation and support of a god, name Arh-Tolth. From their communion was bown what was ot become one of the most powerful nations of Aarklash: the Empire of Dirz.

Dirz used the knowledge given by Arh-Tolth to develop a first generation of clones, the Arhteths. These creatures, as aggressive as they are gigantic, protected the desert against Akkylannian troops before turning on their own creators.

So the alchemists created a second generation of clones, the Isateph, who allowed the Syhars to conquer the desert.

Several events then marked the history of the alchemists of Dirz, among which is the arrival of the goblin ambassadors of N0-Dan-Kar. From their extremely rich genetic potential were born the first rocs, who later rose in rebellion: some fled into the desert while others attempted to overthrow their masters.

Weakened, the alchemists then knew the most tragic incident in their history. Mysterious warrior appeared one desert night and attacked Shamir. Hundreds of Syhars - men, women and children - died atrociously. Dirz was found badly wounded in the Shamir ruins.

Unable to govern, the Heresiearch transmitted his powers to Basyleus Antykain before falling into a torpor from which he never awakened.

The new Shamir was builtat a few days march from where the old one stood. The Syhar Empire was slowly being born again.

Basyleus Villa currently reins as the supreme emperor over the Empire of the Scorpion. He continues the research started several hundred years earlier by the Heresiarch himself.

The Companion of Torments

The Eye of the Hunter

The Kiss of Darkness

The Kiss of the Desert

The Root of All Evil