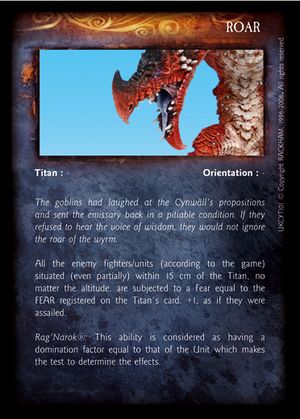 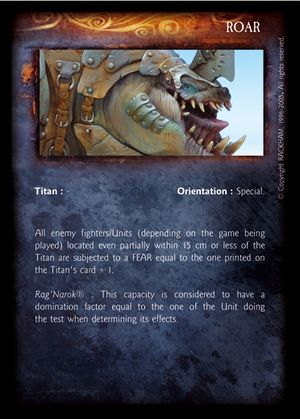 The goblins had laughed at the Cynwäll's propositions and sent the emissary back in a pitiable condition. If they refused to hear the voice of wisdom, they would not ignore the roar of the wyrm.

All the enemy fighters/Units (according to the game) situation (even partially) within 15 cm of the Titan, no matter the altitude, are subjected to a Fear equal to the FEAR registered on the Titan's card, +1, as if they were assailed.

Rag'Narok®: This ability is considered as having a domination factor equal to that of the Unit which makes the test to determine the effects.

All enemy fighters/Units (depending on the game being played) located even partially within 15 cm or less of the Titan are sujected to a FEAR equal to the one printed on the Titan's card + 1.

Rag'Narok: This capacity is considered to have a domination factor equal to the one of the Unit doing the test when determining its effects.