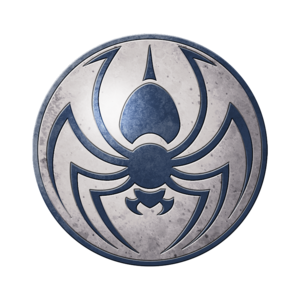 Beyond the Behemoth Mountains, on the coasts of the sea of Sol, lies a forest of Darkness where the worst nightmares cane spring from the shadows and take their terrified prey to an undesirable fate. This sinister place is Ashinân, the domain of the Akkyshan elves.

Here and there it is claimed that Akkyshan spider-women devour their males and that their slaves only here to be sacrificed in combat.

The reality is different. The Akkyshans haven't all been touched by the metamorphosis that transforms their holy warriors into arachnoid furies. And their women don't look down upon all men with disdain. The Akkyshans are perfectly aware of their rightful place in their people's matriarchal hierarchy. As for the slaves...well, some rumors are true.

The history of the Akkyshans began several dozen years after the of Serrelis. The only heir to the thrones was Salma's daughter Scaëlin. Her beauty was radiant as the sun, sweet as honey, and intoxicating as the scent of the flowers of Laureken. The princess was so perfect that even the gods noticed her. One of them decided to giver her a visit using one of his faithful.

Beauty also heard the news and found Inspiration disguised as a simple courtier. Discovering his attraction for a mere mortal, beauty went into a ft of anger and bewitched all of the palace's guests. When dawn came, all Scaëlin saw in mirrors and her servant's looks was the reflection of ugliness itself. The princess didn't appear before her subjects that day, or any of the following days. One night Beauty appeared before her in the shape of a spider with a shimmering body and presented herself as Lilith, the Black Widow. Lilith mocked her rival and offered a deal: she would give her her lost beauty if she swore to worship her unfailing. Scaëlin accepted without hesitation and thus became the Widow's first priestess. she was invested with incredible powers and didn't hesitate to use them, drawing her closest servants along with her. Her mind was suddenly confronted with the reality of the physical transformations her body underwent every time she used her dark magic. Every day her obscure powers made her look more like the Black Widow she swore to serve.

The doctors sent by her father and courtiers who wooed for her hand didn't take long to discover, at the risk of their lives, that the palace had become a monstrous lair in which Evil reigned as master.

Scaëlin managed to escape and was hunted across the Emerald Forest by her former suitors. In a burst of fury and despair, she scarified what was left of her beauty by casting a curse onto all of the women of her people.

The dishonored princess and her court settled a cave in the forest of Ashinân. A short time later their offspring were born and claimed a whole territory in the Widow's name. They took the name Akkyshans, the Spawn of Blackness.

This army has zero playable units.