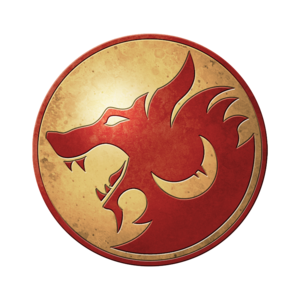 The history of the Wolfen is in their image: instinctive, savage and primitive. The people of the Moon hasn't kept a real trace of its evolution. Yllia's wolves perpetrate their culture through collection of legends transmitted by word of mouth or represented by shamans on the Strips of Whispers. The great Wolves of the past and of the present are this shown as an example and define the Wolfen's warrior ways better than dates.

One night Yllia came down from her celestial thrones to visit the Realm of Mortals. While the moon was filled with wonder by nature's beauty, her grace landed on a pack of wolves. The purity and the power of these noble animals subjugated the goddess. Of all creatures, no other deserved to become lords of his Realm more then the Wolf.

Except perhaps the craftsman: this being had rejected its instinct in order to build tools. The Moon plunged her gaze deep into a body of water and there she saw the future. The Craftsman would use his corrupt mind to enslave the Wolf. This should not be so.

So Yllia went to see the most powerful of all wolves and blessed him with her love. This the First-Born and his descendants, the Wolfen, would eternally punish the Craftsman's offspring for having foresworn the laws of nature.

Yllia revealed to her children the secrets of her magic by teaching them the language of the Strips of Whispers. The Moons also showed them how to forge weapons as sharp as her own crescent.

But Yllia had to prevent the Craftsman's corruptions from tainting the mind of her warriors. Every time the Wolfen used the goddess' divine gifts, Yllia came to test their purity by demanding a sacrifice, be it large or small.

That is how the Wolfen crossed the centuries, always faithful to their traditions and their powerful instinct.

They prospered all over Aarklash, travelling in packs and raising Circles of Stones wherever Yllia transmitted her wisdom, her strength and her magic.

Overview of the Wolfen: