Concord of the Eagle 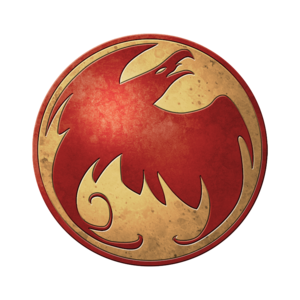 Concord of the Eagle

The story of the Concord of the Eagle begins on the western shores of Aarklash, when the men from Kel came ashore near Kel-An-Tiraidh. The ogmanan giants and the centaurs, worshippers of the earth goddess Danu and the solar god Lahn, greeted these strangers and offered them shelter, on one unique condition: that they worship Danu. The people of Kel, forced to exile by the manipulations of the gods of its homeland, categorically refused. A terrible war began, which ended only when the goddess Danu herself, unfaithful to her celestial husband, united with Cernunnos, then prince of Kel, and gave him three daughters. Centaurs, ogmanans and humans then formed one peaceful nation. Lahn gave in to jealousy and became the sinister Scatach, the Shadowy, and in turned charmed the impetuous prince. The fruit of their union was Agoth, the first formor, an extremely evil being. Cernunnos, caught off guard, fled to never be seen again. A handful of his followers left to find him, cursing the gods and their manipulations again. From that schism were born two cultures, still enemies to this day: the Sessairs, worshippers of Danu and Light, and the Drunes, worshippers of Cernunnos and Darkness. Soon, the races present on Aarklash before the coming of men witnessed the expansion of the Sessairs throughout the Avagddu plains and the first massacres committed by the dark Drunes.

THE WARRIORS OF FHE BLACK MOUNTAIN

Only one race dared stand against the growing menace: the minotaurs. The minotaurs had, in immemorial times, been given a prophecy which announced the coming of the humans and the age of steel which was to follow. This prediction had been given to them by Thunder-eagle, the messenger from the Faathi which composed the trinity of Destiny. Alas, the struggle of the minotaurs was in vain. The bloody battles fought in the name of Destiny were not enough to contain the expansion of the humans. The minotaur archons, guardians of balance, then called upon the other races of Aarklash to join them in their hopeless mission... in vain. No one wanted to believe that the humans, split between Darkness and Light and so quick in destroying themselves, could prosper to the point of putting Destiny in danger. The minotaurs, decimated by years of fighting, admitted their defeat and spread across Aarklash. Most mingled with the Kelts, whose emblem they soon became. Others, under the cover of being mercenaries, gave themselves up to the whims of Destiny. The minotaur archons followed Thunder-eagle to the Black mountain, cradle of their race. There they invoked Abhardin, Asura and Nyris, oracles of the Faathi, and left for the Realm of Shenroth in a gigantic fortress floating through the air.

THE RETURN OF THE FAATHI

The centuries passed, witness to the unstoppable human expansion. The kelt tribes conquered Avagddu and gave birth to new nations bound to Light and Darkness: the Lions of Alahan, the Griffons of Akkylania, the Limbo of Acheron and the Alchemists of Dirz. The Paths of Destiny could do nothing against the humans and left their land on which empires and kingdoms were built. Everywhere, Light and Darkness imposed their rule. Many warlords of Destiny, inspired by the faithful, now remember the prophecy of the Eagle and agree that the wars of humanity have sown discord and started the Rag’narok. Elves, dwarves, ogres, orcs, trolls and Wolfen, along with centaurs and giants from the Horde of Murgan and a handful of goblins who have rebelled against the authority of their emperor, have gathered around the minotaurs. They have led them, in turn, to the Black mountain, north of Bran-O-Kor. There, on the Eagle’s plateau, they have fulfilled the ritual of Destiny and opened Shenroth’s portal, freeing the Thunder-eagle and the immortal army of the Faathi.

THE CONCORD OF THE EAGLE

The Concord of the Eagle regroups warriors of Destiny who intend to keep humanity from consuming Aarklash. These warriors are willing to do anything to restore the elemental balance. Their army comes from both Aarklash and Shenroth. Relations between these two communities are handled by the minotaurs, who have prospered on both sides of the portal of the Black mountain. The archons have good relations with their descendants born on Aarklash.

The warriors native to Aarklash have decided to put aside their differences in the name of a common cause. Some, like the dwarves or the Wolfen, come from races who were there before the coming of man. Others, like the orcs, have appeared as the ages went by. Yet others, like the centaurs and the ogmanan giants, have seen their culture absorbed or destroyed by human civilization and see in the Concord of the Eagle a way to avenge their ancestors. Under the tutoring of the archons and the oracles of the Faathi, the warriors of the Eagle have learned shen, the language of Shenroth, to communicate efficiently before and during the battle. The Concord is led by a war staff composed of Asthenas, a centaur knight raised following Dracynran traditions, Norrstrom, a mountain giant from Naél-Tarn, Khulrtin, rebel raik from the Sarkai tribe, and Gurath, the minotaur, Hurricane of the Black mountain. These warlords regularly meet with Velkanos, leader of the Horde of Murgan, but are never able to convince him to join them for good.

The army from Shenroth is much smaller, but just as varied as the one from Aarklash. It is composed of Immortals united under the authority of three beings of great power: the Thunder-eagle and his two oracles, Abhartin and Nyris. The minotaur archons form the personal guard of these princes from Shenroth and loyally serve the cause of the Faathi. Since the beginning of the Rag’narok, the balance of natural forces is in peril. As time went by, the army of Shenroth has rallied many elemental beings from ; conquered or devastated Realms. These past few years, their number has kept increasing. Shenroth is a suspended world made up of many small “isles” of various sizes floating in a sky of everchanging colors. The flying lands of Shenroth are linked to one another by elemental portals which look like vortexes. The army of the Faathi has always moved about Shenroth by use of Abharin ‘s flying fortress.

The flight of the Thunder-eagle has announced the Concord’s entrance into the war. The armies of the Faathi are already engaged in a great battle against the Possessed of the Abyss who infest the areas near Fom-Nur and the Red oak forest. Abhartin’s legion, flying over Bran-O-Kor, has annihilated many Akkylannian outposts and is heading to the south to give a hand to the Thunder riders against the Syharhalnian army.

Centuries of fighting have not spared the army of Shenroth. It has lost one of its oracles, Asura, during a war in the dark Realm of Phobos. Left for dead on the battlefield, Asura lost his reason and the temptations of the power of Darkness submerged him. He returned to Aarklash when the archimage Kaïan Draghost opened the portal to Phobos. Asura then became Asura of Sarlath, Father of one of the dark houses of Acheron. The fallen oracle has sensed the presence of his brothers (and vice-versa) during the ritual of Destiny. The flying fortress of the house of Sarlath, recently torn from the ground of Acheron (see Cry Havok 06) will eventually cross paths with Abharûn’s. The resulting battle will be terrible !

Overview of Concord of the Eagle

Playing the Concord of the Eagle