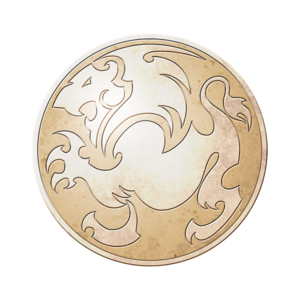 Founded over five centuries ago by the descendants of two knelt clans, the Kingdom of the Lion is the biggest human territory of Aarklash. This land of justice and prosperity is the most valiant defender of Light on the continent that is prey to darkness.

The knights and the powerful magicians of the lion are paragons of virtue who fight tin the name of noble ideals. The Lions are reputed for their bravery and temerity in the face of the most terrifying of peril. The exploits carried out in the name of their fatherland and their kind have become legendary. The nole houses of the nine baronies of the Lion are grateful for the honour, heroism and loyalty of the brave fighters who wield their coats of arms.

In an age where the enemies of Light make use of the most perfidious means to reach their ends, the Lions don't content themselves with travelling all over the world as wandering knights looking for wrongs to right. They are proud owners of the most prestigious fleet of Aarklash, and are diplomats, spies and fearless roamers. The Lions of Alahan make the most of their valour in the war they have chosen to wage: the one for goodness.

The history of the Kingdom of Alahan begins with the rivalry between two kelt clans, the Ylliaar and the Lahnar. The Lahnar, worshippers of a sun god and outstanding warrior, were the guardians of the border between Lahnaen, the lands of Light, and the Valley of Darkness haunted by the creatures of the night. When their shamans felt the magic of Lahnaen grew, they believed tat they were blessed by the gods. The Ylliaar, heirs to the Moon, didn't agree. Their mystic-filled clan felt the coming invasion of Darkness. The Ylliaar prepared to push back the onslaught of the infernal forces.

The Ylliaar's incursions into Lahnaen gave rise to a conflict that lasted for years. Neither of the two clans managed to prevent darkness from Manifesting itself over their lands.

That is when the Chimera intervened. Appearing as an Ylliaar woman, the immortal being proposed an alliance to the young king go Lahnar, Leonid the Lion. Lahnar and Ylliaar united to give rise to a new clan: the Alahaar.

Together they managed to liberate their homeland and conquer the valley of Darkness.

The glorious crowning of Alcyd the Paladin, son f Lionid and the Chimera, saw the unification and their declaration of sovereignty and the Kingdom of Alahaen.

The kingdom was divided into ten baronies. Law replaced traditions and the clannish hierarchy gave way to nobility. For the first time, the powerful weren't fighting to make the law, but rather to make it be respected.

Alahan consolidated and know a long period of prosperity. This kingdom became the biggest in human territory united under the authority of one leader. Everyone of its kings inherited the name of Lion and shone over Aarklash as an example of courage, honour and justice.

It is in these lands of virtue that Evil came to get revenge. Darkness slowly took over the kingdom's tenth barony - Acheron. The infernal monsters haunt Aarklash anew: new heroes must rise to stand up to Darkness.

Officer of the Lion

The Insignia of Arïn's Glaive

The Shields of the Baronies

May the Light Protect You

For the Glory of the Bold

Annihilation of the Shadows

Tenacity of the Chimera

Let There Be Light

The Eye in the Sky