The Archons of the Faathi 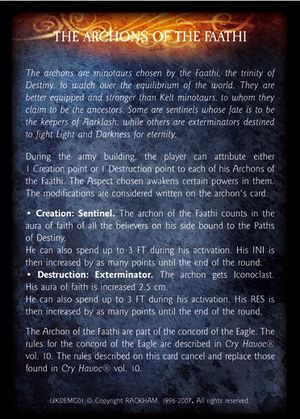 The Archons of the Faathi

The archons are minotaurs chosen by the Faathi, the trinity of Destiny, to watch over the equilibrium of the world. They are better equipped and stronger than Kelt minotaurs, to whom they claim to be the ancestors. Some are sentinels whose fate is to be the keepers of Aarklash, while others are exterminators destined to fight Light and Darkness for eternity.

During the army building, the player can attribute either 1 Creation point or 1 Destruction point to each of his Archons of the Faathi. The Aspect chosen awakens certain powers in them. The modifications are considered written on the archon's card.