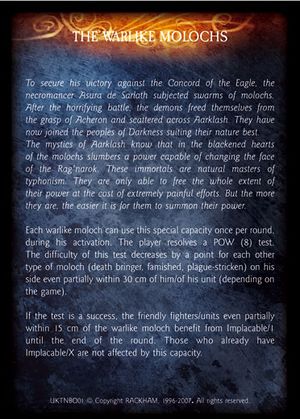 To secure victory over the Concord of the Eagle, the necromancer Asura de Sarlath subjected swarms of molochs. After the horrifying battle, the demons freed themselves from the grasp of Acheron and scattered across Aarklash. They have now joined the peoples of Darkness suiting their nature best. The mystics of Aarklash know that in the blackened hearts of the molochs slumbers a power capable of changing the face of the Rag'Narok. These immortals are natural masters of typhonism. They are only able to free the whole extent of their power at the cost of extremely painful efforts. But the more they are, the easier it is for them to summon their power.

Each Warlike Moloch can use this special capacity once per round, during his activation. The player resolves a POW (8) test. The difficult of this test decreased by a point for each other type of moloch (Death Bringer, Famished, Plaguestricken) on his side even partially within 30 cm of him/of his Unit (depending on the game).

If the test is a success, the friendly fighters/Units even partially within 15 cm of the warlike moloch benefit from Implacable / 1 until the end of the round. Those who already have Implacable / X are not affected by this capacity.