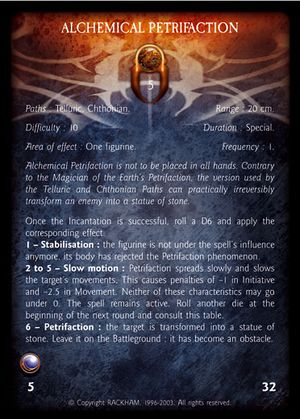 Alchemical Petrifaction is not to be placed in all hands. Contrary to the Magician of the Earth's Petrification, the version used by the Telluric and Chthonian Paths can practically irreversibly transform an enemy into a statue of stone.

Area of Effect: One figurine

Once the Incantation is successful, roll a D6 and apply the corresponding effect.

1 - Stabilization: the figurine is not under the spell's influence anymore, its body has rejected the Pretifaction phenomenon.

2 to 5 - Slow Motion: Petrifaction spreads slowly and slows the target's movements. This causes penalties of -1 in Initiative and -2.5 in Movement. Neither of these characteristics may go under 0. The spell remains active, Roll another die at the beginning of the next round and consult this table.

6 - Petrifaction: the target is transformed into a status of stone. Leave it on the Battleground: it has become an obstacle.