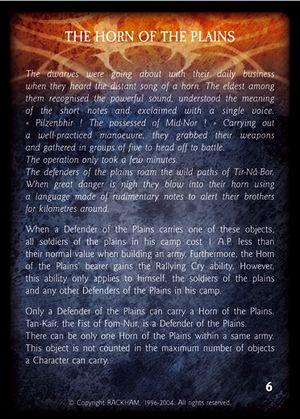 The dwarves were going about with their daily business when they heard the distant song of a horn. The eldest among them recognized the powerful sound, understood the meaning of the short notes and exclaimed with a single voice.

Carrying out a well-practiced maneuver, they grabbed their weapons and gathered in groups of five to head off to battle.

The operation only took a few minutes.

The defenders of the plains roam the wild paths of Tir-Nâ-Bor. When great danger is nigh they blow into their horn using a language made of rudimentary notes to alert their brothers for kilometers around.

Tan-Kaïr, The Fist of Fom-Nur, is a Defender of the Plains.

There can only be one Horn of the Plains within a same army.

This object is not counted in the maximum number of objects a Character can carry.