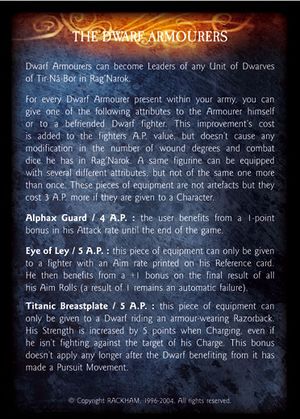 Dwarf Armorers can become Leaders of any Unit of Dwarves of Tir-Nâ-Bor in Rag'Narok.

For every Dwarf Armorer present within your army, you can give one of the following attributes to the Armorer himself or to a befriended Dwarf fighter. This improvement's cost is added tot he fighters A.P. value, but doesn't cause any modification in the number of wound degrees and combat dice he has in Rag'Narok. A same figurine can be equipped with several different attributes, but not of the same one more than once. These pieces of equipment are not artifacts but they cost 3 A.P. more if they are given to a Character.

Alphax Guard / 4 A.P.: The user benefits from a 1 point bonus in his Attack rate until the end of the game.

Eye of Ley / 5 A.P.: This piece of equipment can only be given to a fighter with an Aim rate printed on his Reference card. He then benefits from a +1 bonus on the final result of all his Aim Rolls (a result of 1 remains an automatic failure).

Titanic Breastplate / 5 A.P.: This piece of equipment can only be given to a Dwarf riding an armor-wearing Razorback. His Strength is increased by 5 points when Charging, even if he isn't fighting against the target of his Charge. This bonus doesn't apply any longer after the Dwarf benefiting from it has made a Pursuit Movement.