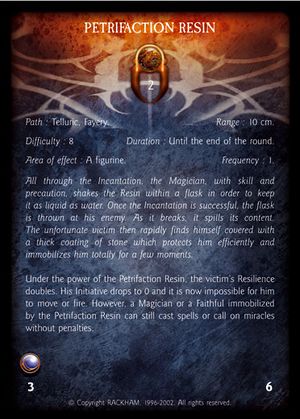 All through the Incantation, the Magician, with skill and precaution, shakes the Resin within a flask in order to keep it as liquid as water. Once the Incantation is successful, the flask I thrown at his enemy. As it breaks, it spills its content. The unfortunate victim then rapidly finds himself covered with a thick coating or stone which protects him efficiently and immobilizes him totally for a few moments.

Area of Effect: A figurine