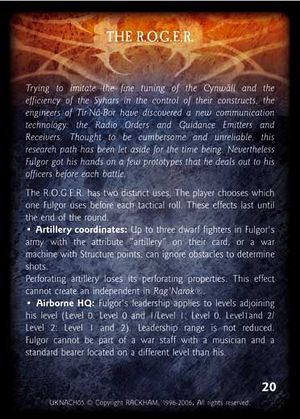 Trying to imitate the fine tuning of the Cynwall and the efficiency of the Syhars in the control of there constructs, the engineers of Tir-Na-Bor have discovered a new communication technology, the Radio Orders and Guidance Emitters and Receivers. Thought to be cumbersome and unreliable this research path has been let aside for the time being. Nevertheless Fulgor got his hands on a few prototypes that he deals out to his officers before each battle.

The R.O.G.E.R. has two distinct uses. The player chooses which one Fulgor uses before each Tactical Roll. These effects last until the end of the round.