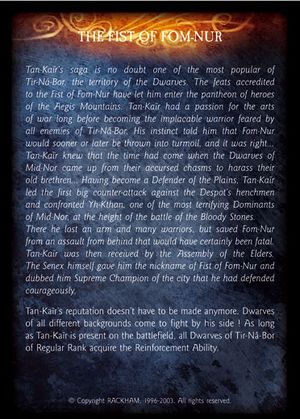 Tan-Kaïr's saga is no doubt one of the most popular of Tir-Nâ-Bor, the territory of the Dwarves. The feats accredited to the Fist of Fom-Nur have let him enter the pantheon of heroes of the Ægis Mountains. Tan-Kaïr had a passion for the arts of war long before becoming the implacable warrior feared by all enemies of Tir-Nâ-Bor. His instinct told him that Fom-Nur would sooner or later be thrown into turmoil, and it was right... Tan-Kaïr knew that the time had come when the Dwarves of Mid-Nor came up from their accursed chasms to harass their old brethren... Having become a Defender of the Plains, Tan-Kaïr led the first big counter-attack against the Despot's henchmen and confronted Yh-Kthan, one of the most terrifying Dominants of Mid-Nor, at the height of the battle of the Bloody Stones.

There he lost an arm and many warriors, but saved Fom-Nur from an assault from behind that would have certainly been fatal. Tan-Kaïr was then received by the Assembly of the Elders. The Senex himself gave him the nickname of the Fist of Fom-Nur and subbed him Supreme Champion of the city that he defended courageously.

Tan-Kaïr's reputation doesn't have to made anymore. Dwarves of all different backgrounds come to fight by his side! As long as Tan-Kaïr is present on the battlefield, all Dwarves of Tir-Nâ-Bor of Regular Rank acquire the Reinforcement ability.