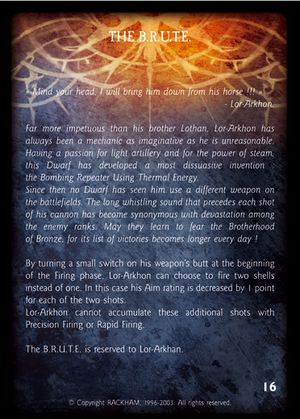 "Mind your head. I will bring him down from his horse!!!"

Far more impetuous than his brother Lothan, Lor-Arkhon has always been a mechanic as imaginative as he is unreasonable. Having a passion for light artillery and for the power of steam, this Dwarf has developed a most dissuasive invention, the Bombing Repeater Using Thermal Energy.

Since then no Dwarf has seen him use a different weapon on the battlefields. The long whistling sound that precedes each shot of his cannon has become synonymous with devastation among the enemy ranks. May they learn to fear the Brotherhood of Bronze, for its list of victories becomes longer every day!

By turning a small switch on his weapon's butt at the beginning of the Firing phase, Lor-Arkhon can choose to fire two shells instead of one. In this case, his Aim rating is decreased by 1 point for each of the two shots.