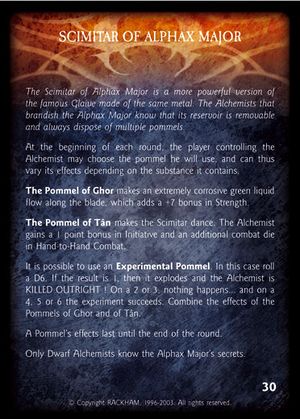 The Scimitar of Alphax Major is a move powerful version of the famous Glaive made from the same metal. The Alchemists that brandish the Alphax Major know that its reservoir is removable and always dispose of multiple pommels.

At the beginning of each round, the player controlling the Alchemist may choose the pommel he will use, and can thus vary its effects depending on the substance it contains.

The Pommel of Ghor makes an extremely corrosive green liquid flow along the blade, which adds a +7 bonus in Strength.

The Pommel of Tân makes the Scimitar dance. The alchemist gains a 1 point bonus in Initiative and an additional combat die in Hand-to-Hand Combat.

It is possible to use an Experimental Pommel. In this case roll a D6. If the result is 1, then it explodes and the Alchemist is KILLED OUTRIGHT! On a 2 or 3, nothing happens... and on a 4, 5, or 6 the experiment succeeds. Combine the effects of the Pommels of Ghor and Tân.

A Pommel's effects last until the end of the round.