From Confrontation.wiki
(Redirected from Goblins of No-Dan-Kar)
Jump to navigation Jump to search 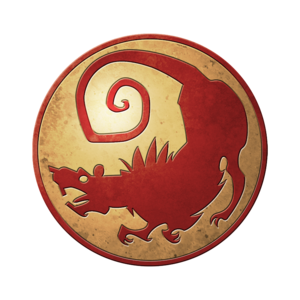 When dealing with goblins one should never trust appearances. Their prolific race has multiplied all over Aarklash. Wherever you may go, they will already be there before you. When anger takes hold of them, they gather and swarm over their enemy.

A very long time ago the goblins were the Dwarves of Tir-Nâ-Bor's slaves. At the calling of the god Rat they fled while causing indescribable panic. So they founded an empire in the swamps of No-Dan-Kar and then spread all over the continent.

Among the goblins there are an impressive number of inventors. Their species is divided into a multitude of tribes of which most would have a hard time naming their emperor, Izothop.

Scattered, the goblins are a nuisance. United under a common language and under the same banner, they become a scourge.

The goblin army features extreme versatility. With a high number of models often fielded, goblins will almost certainly outnumber their opponent. They have above average initiative with strong & cheap characters & mystics. The army features racial abilities to either enhance its numbers (Reinforcement) or to enhance its survivability (Survival Instinct). However, the army does not have high statistics in any category other than initiative, and goblin players should expect wacky shenanigans and a lot of death in the games they play.

This army has some units. General overview of units. Goblin characters have <Survival Instinct> and troops have <Reinforcement> yada yada.

This army has some units. General overview of units. Goblin characters have Survival Instinct and troops have either Reinforcement or Survival Instinct yada yada. The following are all bound to the Ûraken clan with the exception of Yakûsa the Rebel and Sumotoro the Brute.

Artifacts that came with goblins that are not reserved

The Bell of the God Rat*

The Ninth Pump of Rat

The Second Bell of the God Rat

Miracles that came with goblins that are not reserved

Contemplation of the Realms

Tide of the God Rat

The Second Bell of the God Rat

Spells that came with goblins that are not reserved

Illusion of the God Rat*

Experience cards that came with goblins for Confrontation 2nd edition

Brothers of the Coast

Campaigns and adventures that came with goblins for Confrontation 2nd edition

A Shadow Amongst Shadows

The Mystery and the Wooden Leg

The Scepter of Communion*

The Bell of the God Rat*

Illusion of the God Rat*