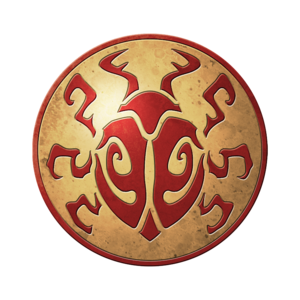 There is no trace of the elves before the Age of Rebirth. Their first steps in Aarklash's history are compiled in the tales of other peoples. As for the Daikinee's collective memory, it begins at the moment the a handful of the courageous warrior leave the Emerald Forest to go looking for the god of dawn.

Aoh, the spirit of all life had lost his mind. having become the Spirit of Winter, he sent his warriors to petrify the Eternal Forest. Aekhyn and Earhe, the spirits of Quithayran, were on the lookout. Eakhyn, the god of dawn, left to confront Winter accompanied by the fayes, the spirit guardians of nature. Earhe, the goddess of dusk, asked the elves ot protect Quithayran while went to cure Aoh.

When the fayes returned, Eakhyn had disappeared. All understood the reason why on Earhe's return. Within her she carried Aoh's pain and she gave birth to Wisshard, a gigantic beast.

Wisshard was consumed by an unmentionable hunger that he sought to appease by devouring all the creatures that passed within his reach. Earhe was still too weak to fight, and the fayes were swallowed up one after another. Only Eakryn could vanquish Wissahd. So the elves and the fayes decided to embark on a quest for the god of dawn.

The Daikinees thus roamed in the borders of history. For a long time they remained an isolated people who resisted the presence of strangers in their territory.

Everything change about five centuries ago when Queen Fayre Ne-Inekia, the wife of King Seos, gave birth to the twins Elhan and Silmea. At Seo's death, Serrelis, the was of succession, broke out. Elhan abdicated and founded the Wynwall nation in the region of Lanever. a generation later Silmea's daughter Scealin took possession of the domain of Ashinan without anyone being able ot stop her.

Fatality has befallen the Eternal Forest. Quithayran and the fayes are dying off. Darkness has swept over Aarklash....Aoh is once again ill.

Scepter of the Scarab

Fayree, Fayeree, Fayerie, Fayery, Fairy, Faye, Fayry are all in reference to the same capacity of creature, magic and spirit that inhabit Quithayran, the Emerald Forest, aka the eternal forest. The various spellings of the same capacity are due to translation errors/choices by the various translators employed by Rackham.