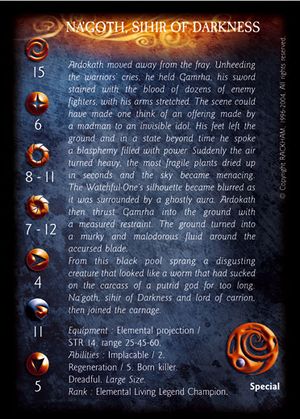 Ardokath moved away from the fray, Unheeding the warriors' cries, he held Gamrha, his sword stained with the blood of dozens of enemy fighters with his arms stretched. The scene could have made one think of an offering made by a madman to an invisible idol. His feet left the ground an in a state beyond time he spoke a blasphemy filled with power. Suddenly the air turned heavy, the most fragile plants dried in seconds and the sky became menacing. The Watchful-One's silhouette became blurred as it was surrounded by a ghostly aura. Ardokath then thrust Gamrha into the the ground with a measured restraint. The ground turned into a murky and malodorous fluid around the accursed blade.

From this black pool sprang a disgusting creature that looked like a worm that had sucked on the carcass of a putrid god for too long. Na'goth, sihir of Darkness and lord of carrion, then joined the carnage.

Grasp of the Void