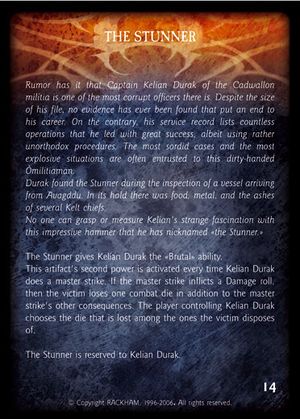 Rumor has it that Captain Kelian Durak of the Cadwallon militia is one of the most corrupt officers there is. Despite the size of his file, no evidence has ever been found that put an end to his career. On the contrary, his service record lists countless operations that he led with great success, albeit using rather unorthodox procedures. The most sordid cases and the most explosive situations are often entrusted to this dirty-handed militiaman.

Durak found the Stunner during the inspection of a vessel arriving from Avagddu. In its hold there was food, metal, and the ashes of several kelt chiefs.

No one can grasp or measure Kelian's strange fascination with this impressive hammer that he has nicknamed "The Stunner."

The Stunner is reserved to Kelian Durak.