The Sons of the Hydra 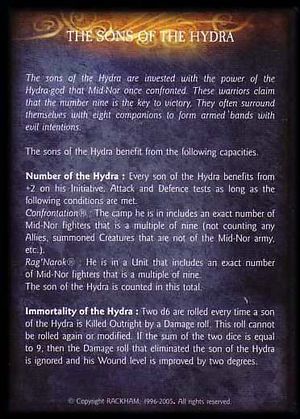 The Sons of the Hydra

The sons of the Hydra are invested with the power of the Hydra-god that Mid-Nor once confronted. These warriors claim that the number nine is the key to victory. They often surround themselves with eight companions to form armed bans with evil intentions.

The Sons of the Hydra benefit from he following capacities.

Number of the Hydra: Every son of the hydra benefits from +2 on his Initiative, Attack and Defense tests as long as the following conditions are met.

Confrontation: The camp he is in includes an exact number of Mid-Nor fighters that is a multiple of nine (not counting any Allies, summoned creatures that are not of the Mid-Nor army, etc.).

Rag'Narok: He is in a Unit that includes an exact number of Mid-Nor fighters that is a multiple of nine.

The son of the Hydra is counted in this total.