The Scourge of the Despot 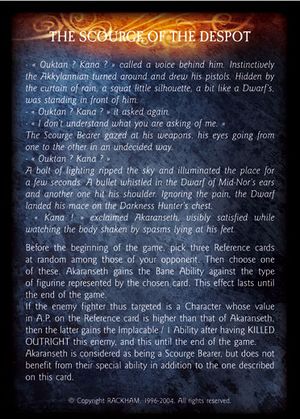 The Scourge of the Despot

"Ouktan? Kana?" called a voice behind him. Instinctively the Akkylannian turned around and drew his pistols. Hidden by the curtain of rain, a squat little silhouette, a bit like a Dwarf's, was standing in front of him.

"I don't understand what you are asking of me."

The Scourge Bearer gazed at his weapons, his eyes going from one to the other in an undecided way.

A bolt of lightning ripped the sky and illuminated the place for a few seconds. A bullet whistled in the Dwarf of Mid-Nor's ears and another one hit his shoulder. Ignoring the pain, the Dwarf landed his made on the Darkness Hunter's chest.

"Kana!" exclaimed Akaranseth, visibly satisfied while watching the body shaken by spasms lying at his feet.

Before the beginning of the game, pick three reference cards at random among those of your opponent. Then choose one of these, Akaranseth gains the Bane ability against the type of figurine represented by the chosen card. This effect lasts until the end of the game.

If the enemy fighter thus targeted is a Character whose value in A.P. on the Reference card is higher than that of Akaranseth, then the latter gains the Implacable / 1 ability after having KILLED OUTRIGHT this enemy, and this until the end of the game.

Akaranseth is considered as being a Scourge Bearer, but does not benefit from their special ability in addition to the one described on this card.