The Mask of the Torturer 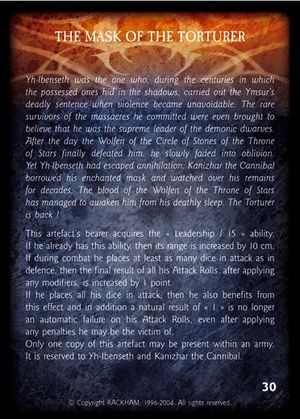 The Mask of the Torturer

Yh-Ibenseth was the one who, during the centuries in which the possessed ones hid in the shadows, carried out the Ymsur's deadly sentence when violence became unavoidable. The rare survivors of the massacres he committed were even brought to believe that he was the supreme leader of the demonic dwarves. After the day the Wolfen of the Circle of Stones of the Throne of Stars finally defeated him, he slowly faded into oblivion. Yet Yh-Ibenseth had escaped annihilation, Kanizahr the Cannibal borrows his enchanted mask and watched over his remains for decades. The blood of the Wolfen of the Throne of Stars has managed to awaken him from his deathly sleep. The Torturer is back!

This artifact's bearer acquires the "Leadership / 15" ability. If he already has this ability, then its range is increased by 10 cm. If during combat he places at least as many dice in Attack as in Defense, then the final result of all his Attack Rolls, after applying any modifiers, is increased by 1 point.

If he places all his dice in Attack, then he also benefits from this effect and in addition a natural result of "1" is no longer an automatic failure on his Attack Rolls, even after applying any penalties he may be the victim of.

Only one copy of this artifact may be present within an army.