The Mask of Scares 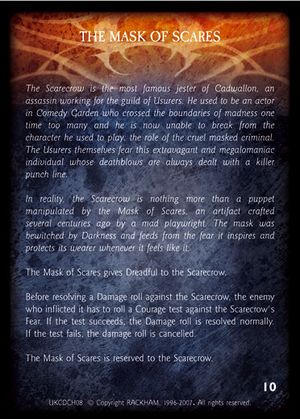 The Mask of Scares

The Scarecrow is the most famous jester of Cadwallon, an assassin working for the guild of Usurers. He used to be an actor in Comedy Garden who crossed the boundaries of madness one time too many an he is now unable to break from the character he used to play, the role of the cruel masked criminal. The Usurers themselves fear this extravagant and megalomaniac individual whose deathblows are always dealt with a killer punch line.

In reality, the Scarecrow is nothing more than a puppet manipulated by the Mask of Scares, an artifact crafted several centuries ago by a mad playwright. The mask was bewitched by Darkness and feeds from the fear it inspires and protects its wearer whenever it feels like it.

The Mask of Scares gives Dreadful to The Scarecrow.

The Mask of Scares is reserved to the Scarecrow.