The Larva of the Ymsur 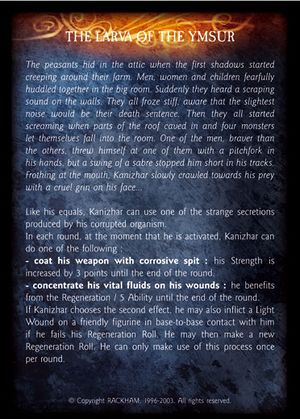 The Larva of the Ymsur

The peasants hid in the attic when the first shadows started creeping around their farm. Men, women and children fearfully huddled together in the big room. Suddenly they heard a scraping sound not he walls. They all froze stiff, aware that the slightest noise would be their death sentence. Then they all started screaming when parts of the roof caved in and four monsters let themselves fall into the room. One of the men, braver than the others, threw himself at one of them with a pitchfork in his hands, but a swing of a saber stopped him short in his tracks. Brother at the mouth, Kanizhar slowly crawled towards his prey with a cruel grin on his face...

Like his equals, Kanizhar can use one of the strange secretions produced by his corrupted organism.

In each round, at the moment that he is activated, Kanizhar can do one of the following: