The Eye of the Abyss 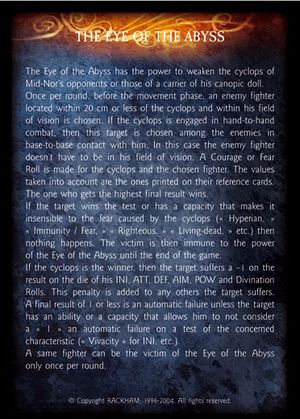 The Eye of the Abyss

The Eye of the Abyss has the power to weaken the cyclops of Mid-Nor's opponents or those of a carrier of his canopic doll.

Once per round, before the movement phase, an enemy fighter located within 20 cm or less of the cyclops and within his field of vision is chosen. If the cyclops is engaged in Hand-to-Hand Combat, then this target is chosen among the enemies in Base-to-Base contact with him. In this case the enemy fighter doesn't have to be in his field of vision. A Courage or Fear Roll is made for the cyclops and the chosen fighter. The values taken into account are the ones printed on their reference cards. The one who gets the highest final result wins.

If the target winds the test or has a capacity that makes it insensible to the fear caused by the cyclops ("Hyperian," "Immunity / Fear," "Righteous," "Living-Dead," etc.) then nothing happens. The victim is then immune to the power of the Eye of the Abyss until the end of the game.

If the cyclops is the winner, then the target suffers a -1 on the result on the die of his INI, ATT, DEF, AIM, POW, and Divination Rolls. This penalty is added to any others the target suffers. A final result of 1 or less is an automatic failure unless the target has an ability or a capacity that allows him to not consider a "1" an automatic failure on a test of the concerned characteristic ("Vivacity" for INI, etc.).

A same fighter can be the victim of the Eye of the Abyss only once per round.