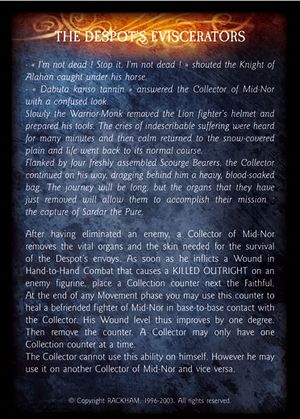 "I'm not dead! Stop it. I'm not dead!" shouted the Knight of Alahan caught under his horse.

"Dabuta kanso tannin." answered the Collector of Mid-Nor with a confused look.

Slowly the Warrior-Monk removed the Lion fighter's helmet and prepared his tools. The cries of indescribable suffering were heard for many minutes and then calm returned to the snow-covered plain and life went back to its normal course.

Flanked by four freshly assembled Scourge Bearers, the Collector continued on his way, dragging behind him a heavy, blood-soaked bag. The journey will be long, but the organs that they have just removed will allow them to accomplish their mission: the capture of Sardar the Pure.

After having eliminated an enemy, a Collector of Mid-Nor removes the vital organs and the skin needed for the survival of the Despot's envoys. As soon as he inflicts a Wound in Hand-to-Hand Combat that causes a KILLED OUTRIGHT on an enemy figurine, place a Collection counter next to the Faithful. At the end of any Movement phase you may use this counter to heal a befriended fighter of Mid-Nor in Base-to-Base contact with the Collector. His Wound level thus improves by one degree. Then remove the counter. A Collector may only have one Collection counter at a time.

The Collector cannot use this ability on himself. However, he may use it on another Collector of Mid-Nor and vice versa.