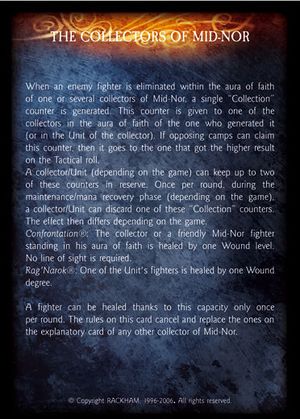 When an enemy fighter is eliminated within the aura of faith of one or several collectors of Mid-Nor, a single "Collection" counter is generated. This counter is given to one of the collectors in the aura of faith of the one who generated it (or in the Unit of the collector). If opposing camps can claim this counter, then it goes to the one that got the higher result on the Tactical Roll.

The effect then differs depending on the game.

Confrontation: The collector or a friendly Mid-Nor fighter standing in his aura of faith is healed by one Wound level. No line of sight is required.

Rag'Narok: One of the Unit's fighters is healed by one Wound degree.

A fighter can be healed thanks to this capacity only once per round. The rules on the card cancel and replace the ones on the explanatory card of any other collector of Mid-Nor.