The Bird of Prey 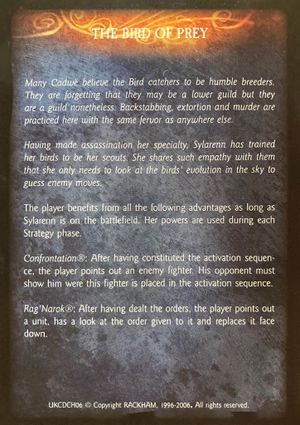 The Bird of Prey

Many Cadwë believe the Bird Catchers to be humble breeders. They are forgetting that they may be a lower guild but they are a guild nonetheless. Backstabbing, extortion and murder are practiced here with the same fervor as anywhere else.

Having made assassination her specialty, Sylarenn has trained her birds to be her scouts. She shares such empathy with them that she only needs to look at the birds' evolution in the sky to guess enemy moves.

The player benefits from all the following advantages as long as Sylarenn is on the battlefield. Her powers are used during each Strategy phase.

Rag'Narok: After having dealt the orders, the player points out a unit, has a look at the order given to it and replaces it face down.