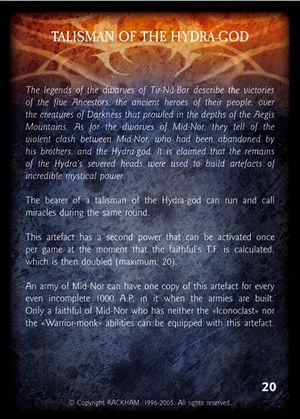 The legends of the dwarves of Tir-Nâ-Bor describe the victories of the five Ancestors, the ancient heroes of their people, over the creatures of Darkness that prowled in the depths of the Ægis Mountains. As for the dwarves of Mid-Nor, they tell of the violent clash between Mid-Nor, who had been abandoned by his brothers, and the Hydra-god. It is claimed that the remains of the Hydra's severed heads were used to build artifacts of incredible mystical power.

The bearer of a talisman of the Hydra-god can run and call miracles during the same round.

This artifact has a second power that can be activated once per game at the moment that the faithful's T.F. is calculated which is then doubled (maximum: 20).

An army of Mid-Nor can have one copy of this artifact for every even incomplete 1000 A.P. in it when the armies are built. Only a faithful of Mid-Nor who has neither the "Iconoclast" nor the "Warrior-Monk" abilities can be equipped with this artifact.