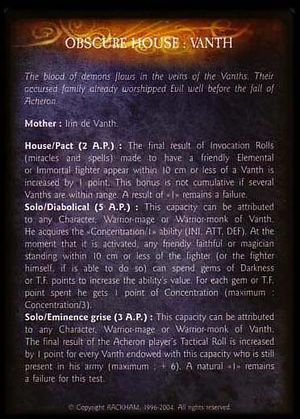 The blood of demons flows in the veins of the Vanish. Their accursed family already worshipped Evil well before the fall of Acheron.

House / Pact (2 A.P.): The final result of Invocation rolls (miracles and spells) made to have a friendly Elemental or Immortal fighter appear within 10 cm or less of a Vanth is increased by 1 point. This bonus is not cumulative if several Vanths are within range. A result of

Solo / Diabolical (5 A.P.): This capacity can be attributed to any Character, <Warrior-Mage> or <Warrior-Monk> of Vanth. He acquires the <Concentration / 1> ability (INI, ATT, DEF). At the moment that it is activated, any friendly faithful or magician standing within 10 cm or less of the fighter (or the fighter himself, if he is able to do so) can spend gems of Darkness

Solo / Eminence Grise (3 A.P.): This capacity can be attributed to any Character, <Warrior-Mage>, or <Warrior-Monk> or Vanth. The final result of the Acheron player's Tactical Roll is increased by 1 point for every Vanth endowed with this capacity who is still present in his army (max: +6). A natural

(1) remains a failure for this test.