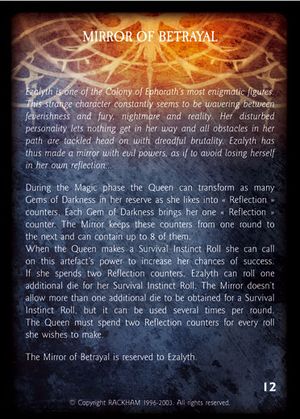 Ezalyth is one of the Colony of Ephorath's most enigmatic figures. This strange character constantly seems to be wavering between feverishness and fury, nightmare and reality. her disturbed personality lets nothing get in her way and all obstacles in her path are tackled head on with a dreadful brutality. Ezalyth has thus made a mirror with evil powers, as if to avoid losing herself in her own reflection.

The Mirror of Betrayal is reserved to Ezalyth.