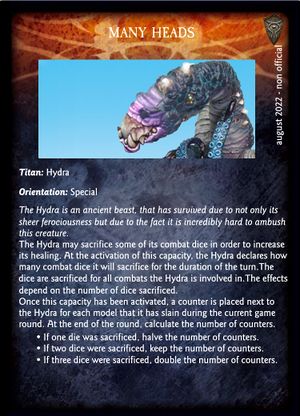 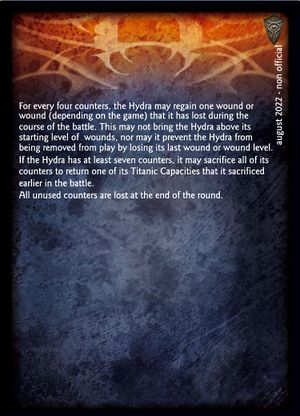 The Hydra is an ancient beast, that has survived due to not only its sheer ferociousness, but due to the fact it is incredibly hard to ambush this creature.

The Hydra may sacrifice some of its combat dice in order to increase its healing. At the activation of this capacity, the Hydra declares how many combat dice it will sacrifice for the duration of the turn. The dice are sacrificed for all combats the Hydra is involved in. The effects depend on the number of dice sacrificed.

Once this capacity has been activated, a counter is placed next to the Hydra for each model that it has slain during the current game round. At the end of the round, calculate the number of counters.

If the Hydra has at least seven counters, it may sacrifice all of its counters to return one of its Titanic Capacities that it sacrificed earlier in the battle.

All unused counters are lost at the end of the round.