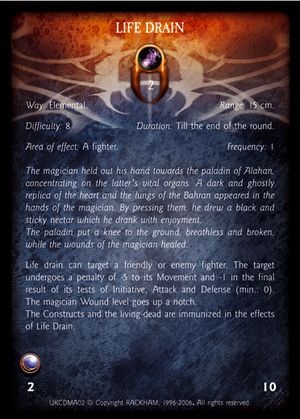 The magician held out his hand towards the paladin of Alan, concentrating on the latter's vital organs. A dark and ghostly replica of the heart and the lungs of the Barhan appeared in the hands of the magician. By pressing them, he drew a black and sticky nectar which he drank with enjoyment.

The paladin put a knee to the ground, breathless and broken, while the wounds of the magician healed.

Area of Effect: A fighter

Life Drain can target a friendly or enemy fighter. The target undergoes a penalty of -5 to its Movement and -1 in the final result of its tests of Initiate, Attack, and Defense (min.: 0). The magician Wound level goes up a notch.

The Constructs and the Living-Dead are immunized in the effects of Life Drain.