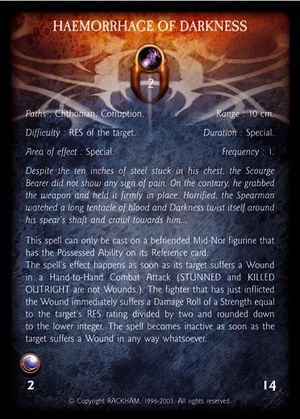 Despite the ten inches of steel stuck in his chest, the Scourge Bearer did not show any sign of pain. On the contrary, he grabbed the weapon and held it firmly in place. Horrified, the Spearman watched a long tentacle of blood and Darkness twist itself around the spear's shaft and crawl towards him...

Difficulty: RES of the target

This spell can only be cast on a befriended Mid-Nor figurine that has the Possessed Ability on its Reference card.

The spell's effect happens as soon as its target suffers a Wound in a Hand-to-Hand Combat Attack (STUNNED and KILLED OUTRIGHT are not Wounds.) The Fighter that has just inflicted the Wound immediately suffer a Damage Roll of a Strength equal to the target's RES rating divided by two and rounded down to the lower integer. The spell becomes inactive as soon as the target suffers a Wound in any way whatsoever.