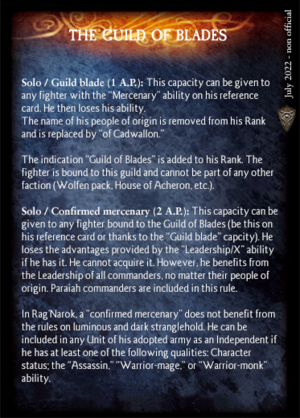 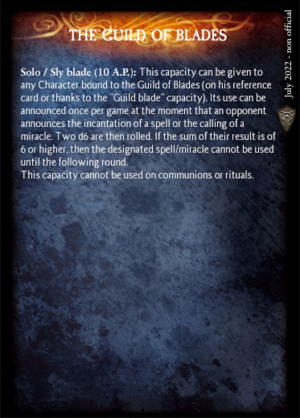 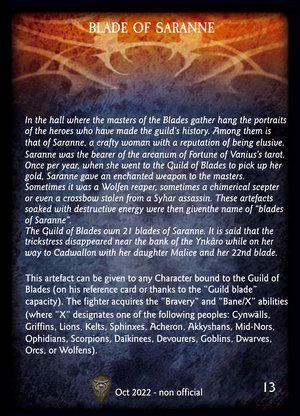 The Guild of Blades is more than a mercenary army; it's an institution. Its interventions have reversed the course of hundreds of battles that have marked the history of Aarklash.

So, big guy, you wanna join the Guild of Blades? Show me your weapon. Show me your hands. Right... C'mon over here. You just have to sign some paperwork and then you'll be on your way to fortune!

Solo / Guild Blade (1 A.P.): This capacity can be given to any fighter with the Mercenary ability on his reference card. He then loses this ability.

The name of his people of origin is removed from his Rank and is replaced by "Cadwallon."

The indication Guild of Blades is added to his Rank. The fighter is bound to this guild and cannot be part of any other faction (Wolfen pack, House of Acheron, etc.).

Milord, I don't like knowing this mercenary so near to you.

I prefer those who serve the cause of my gold to those who pretend to serve that of my judgement. Now leave.

Solo / Confirmed Mercenary (2 A.P.): This capacity can be given to any fighter bound to the Guild of Blades (be this on his reference card or thanks to the Solo / Guild Blade capacity). He loses the advantages provided by the Leadership/X ability if he has it. He cannot acquire it. However, he benefits from the Leadership of all commanders, no matter their people of origin. Pariah commanders are included in this rule.

Haha! What do you think? He also had one or two tricks in store for them. Let me tell you a good one...

Solo / Sly Blade (10 A.P.): This capacity can be give to any Character bound to the Guild of Blades (on his reference card or thanks to the Solo / Guild Blade capacity). Its use can be announced once per game at the moment that an opponent announces the incantation of a spell or the calling of a miracle. Two d6 are then rolled. If the sum of their results is 6 or higher, then the designated spell/miracle cannot be used until the following round.

This capacity cannot be used on communions or rituals.

In the hall where the masters of Blades gather hang the portraits of the heroes who have made the guild's history. Among them is that of Saranne, a crafty woman with a reputation of being elusive.

Saranne was the bearer of the Arcanum X: Destiny of Vanius' Tarot. Once per year, when she went ot the Guild of Blades to pick up her gold, Saranne gave an enchanted weapon to the maters. Sometimes it was a Wolfen reaper, sometimes a chimerical scepter or even a crossbow stolen from a Syhar assassin. These artifacts soaked with destructive energy were then given the name of "Blades of Saranne."

The Guild of Blades owns 21 Blades of Saranne. It is said that the trickstress disappeared near the banks of the Ynkarô while on her way to Cadwallon with her daughter Malice and her 22nd blade.

Artifact / Blade of Saranne (13 A.P.): This artifact can be given to any Character bound to Guild of Blades (on his reference card or thanks to the Solo / Guild Blade capacity). The fighter acquires the Bravery and Bane/X abilities (where X designates one of the following peoples: Cynwälls, Griffins, Lions, Kelts, Sphinxes, Acheron, Akkyshans, Mid-Nor, Ophidians, Dirz, Daïkinees, Devourers, Goblins, Tir-Nâ-Bor, Orcs, or Wolfen).