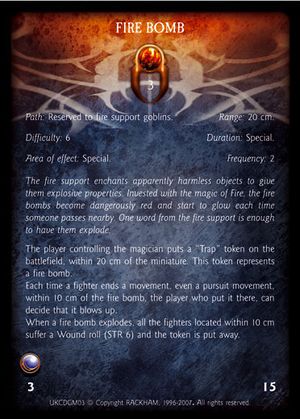 The fire support enchants apparently harmless objects to give them explosive properties. Invested with the magic of Fire, the fire bombs become dangerously red and start to glow each time someone passes nearby. One word from the fire support is enough to have them explode.

The player controlling the magician puts a "Trap" token on the battlefield, within 20 cm of the miniature. This token represents a fire bomb.

Each time a fighter ends a movement, even a pursuit movement, within 10 cm of the fire bomb, the player who put it there, can decide that it blows up.

When a fire bomb explodes, all the fighters located within 10 cm suffer a Wound Roll (STR 6) and the token is put away.