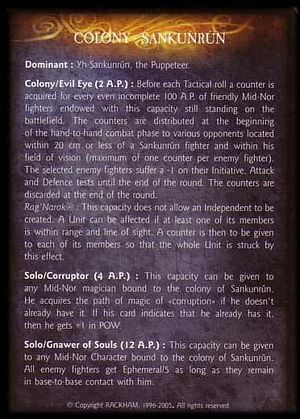 Colony / Evil Eye (2 AP): Before each Tactical Roll a counter is acquired for every even incomplete 100 A.P. of friendly Mid-Nor fighters endowed with this capacity still standing on the battlefield. The counters are distributed at the beginning of the Hand-to-Hand Combat phase to various opponents located within 20 cm or less of a Sankunrûn fighter and within his field of vision (maximum of one counter per enemy fighter). The selected enemy fighters suffer a -1 on their Initiative, Attack and Defense tests until the end of the round. The counters are discarded at the end of the round.

Rag'Narok: This capacity does not allow an Independent to be created. A Unit can be affected if at least one of its members is within range and line of sight. A counter is then to be given to each of its members so that the whole Unit is struck by this effect.

Solo / Corruptor (4 AP): This capacity can be given to any Mid-Nor magician bound to the colony of Sankunrûn. He acquires the path of magic of "Corruption" if he doesn't already have it. If his card indicates that he already has it, then he gets +1 POW.

Solo / Gnawer of Souls (12 AP): This capacity can be given to any Mid-Nor Character bound to the colony of Sankunrûn. All enemy fighters get Ephemeral / 5 as long as they remain in Base-to-Base contact with him.